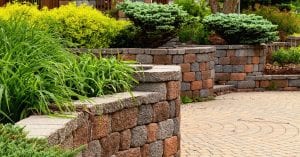 There is no condominium community asset more overlooked than its site walls. They literally become part of the landscape and seem to disappear, yet they are vital to the health of the community. They are sometimes called retaining walls or sometimes simply landscape structures, but in the hilly interiors of Maine or the rugged slopes of the coastline, these structures allow the very existence of some condo communities.

They can be made of many different materials. They can be poured concrete, steel, or timber. They can be concrete block or stone or brick. They can be very tall or very short. Whatever they are, if they fail, they can be dangerous and costly to repair. So, a prudent grounds committee should schedule regular inspections and maintain a log of repairs.

It is recommended retaining walls be inspected four times a year, that is, before or after each season. Heavy rains or soil frost movement can have a significant effect on a retaining wall in a short time. At the very least, someone should perform an annual inspection and compare those findings with the year before.

Like us, aging retaining walls deteriorate primarily because of gravity. This can be due to the excessive soil loading behind the wall or the weight of the wall overloading the soil conditions beneath the wall. The increase of forces behind the wall is often the result of water build up due to surface water above the slope percolating into the ground or a raising ground water table. Weep holes are designed to reduce this increase in hydrostatic pressure, but weep holes can be blocked by debris or overwhelmed by the quantity of water.

One of the first steps in the inspection process is to observe the conditions of the ground surfaces upslope of the retaining wall. Some walls have trench or other types of drains to intercept the water while some ground surfaces are designed to quickly drain water over or around the wall before it can enter the ground behind the wall. If water ponding above the wall is discovered, this problem must be corrected. Ponding will occur if the ground settles or is removed due to erosion. If the top surface is paved, cracking in the asphalt or concrete surface can allow unintended water to enter the soil.

The surface of the retaining wall is the next and perhaps easiest element to inspect. Wall movement should be noted. Walls should lean back toward the slope uphill. If they lean forward or have signs of bulging in any locations this could indicate excess back pressure or failure in the underlying soils. Horizontal cracks are usually more serious than vertical cracks. The first time this is noted it should be brought to the attention of the facility manager or your engineer.

Timber retaining walls can move or crack due to both earth movement and insect attack. Timber wall elements can rot with age.  Any type of wall can crack and allow vegetation matter to grow from either side of the wall. All roots, weeds, or other growth should be removed when discovered, as they can apply considerable pressure to the crack and create localized weakening of the wall. Wall cracks in concrete surfaces can allow moisture to reach the reinforcing steel causing excess corrosion creating not only internal pressures from expanding rust, but also provide a passage for water infiltration creating further deterioration from expanding freeze/thaw cycles.

Missing wall stones or bricks can also be an indicator of severe developing problems.  These missing elements may weaken the structural integrity of the retaining wall and indicate excessive soil pressures forecasting future wall bulging, bowing, or bellying either vertically or horizontally.

As the original retaining wall was designed for specific loading conditions, any changes in the general proximity of the wall should be considered. This could include the placement of a structure or other heavy mass on the ground surface at the top of the wall or changes in use of the land by your upslope neighbor. This could include a roadway, parking lot, or the use of road salts or deicers near the wall. It also includes any changes to the pattern of surface water drainage such as switching from a grassy surface to a mulched surface.

One of the subtlest wall failures is the actual movement of the slope itself. In some circumstances it is possible for the entire hillside to shift or move in mass without damaging the wall itself. For this reason, it is important to document not only the wall but the peripheral areas in the vicinity to ensure any movement out of the ordinary is noted and reported. Especially note any ground movement at the foot of the retaining wall. A visible wall is a safe wall.