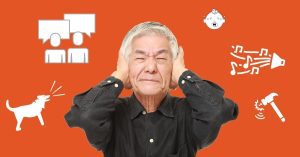 Good friends of mine just retired and decided to move into an upscale condominium community. I asked if it was difficult to adjust to downsizing after leaving the “big” house, and interestingly enough, I was told the size of the living space was not the problem, it was difficult to adjust to the surrounding sounds. They would wake up to the adjacent unit’s alarm clock and kept up at night to the neighbor’s stereo speakers. During the day, they could even hear upstairs neighbors’ dog’s nails on the hardwood floors above.

Community living in Maine has many benefits. It also involves certain compromises. One of the more challenging aspects for owners to come to grips with is noise pollution. Residents, often moving from single family homes, are not used to hearing their neighbors. Sound transmitted between units, or sound from outdoors, can be extremely annoying and disruptive. And while many features of the unit can be appreciated during a walk through, the amount of sound transmission is not always apparent.

If there is a perceived noise problem in your community, one of the first questions to ask is where is that noise coming from? Is the noise coming from the outside? Examples would be transportation related noise such as highways, airplanes or rail noise. It might also be transitory, like construction noise. And it might be seasonal, like outdoor activity, especially when windows are open.

Internal noises may be transferred between units or from common areas into each unit. Transmission between units may be via walls, ceilings, or floors. It may also occur as a result of mechanical chases or through the actual piping or ductwork itself.

When addressing noise issues, it is important to determine whether the problem is localized or omnipresent. Certain orientations may be more susceptible to noise issues than others. Certain parts of a building–those near fans or mechanical equipment, recreational areas, etc.–may be more prone than others to experience problems. We have even found a variation between units due to construction inconsistencies. Field modifications in another area of the same building created a problem.

Any building may experience sound transmission issues, but the biggest determining factors are the physical location, type and quality of construction, and the age of the building. If a development is built near a highway or a flight path, the resulting potential problems may be obvious and hopefully were addressed during the design stages. Older buildings, especially ones that were conversions from factories or warehouses, can present particularly difficult problems. Structural components may abet sound transfer allowing it to pass unobstructed from unit to unit.

While some wall and ceiling assemblies are more effective than others, all must be assembled correctly with plenty of attention to detail. Care must be exercised to avoid “flanking paths” that allow sound to get around sound deadening assemblies.

In a world where perception is reality, the first task is to define the problem. Is the noise that is causing complaints louder or more frequent than the occupants might reasonably expect? It is important to recognize that much of this is subjective. Different people will have different tolerances. The type of noise is also a concern – music, conversation, toilets flushing – each carry with it a relative level of acceptability.

There are, however, some relatively objective standards that have been developed by engineers and scientists to both quantify sound transmission and define acceptable levels.

The Sound Transmission Class (STC) is a value derived from creating and measuring the sound attenuation at various frequencies and comparing that to a standard reference. Whereas the STC measures sound transmission between areas separated by a common surface (walls, windows, etc.), the Apparent Sound Transmission Class (ASTC) is a more comprehensive measure in that it incorporates other pathways of sound transmission such as beams, columns, and chases for mechanical and electrical equipment, and is generally the basis for field testing.

The STC and the IIC (Impact Insulation Class) have been incorporated into local codes. Typically, the code specifies values of 50 (or 45 if field tested). However, codes are typically minimum levels and may not be high enough to produce comfortable noise control in many attached residential units

Sound energy, like thermal energy, is best disrupted by creating breaks between spaces. Mass also plays a role in overall comfort.  Generally, to improve Transmission Loss (the ratio of the sound energy striking the wall to the transmitted sound energy, as expressed in decibels), designers should seek to increase the weight of the surface layers and/or increase the distance between the surfaces.

Fiberglass insulation is often used, even in interior walls, to reduce sound transmission. Caulks and sealants are often used as well. Building walls in which the studs are offset and penetrations like electrical boxes and medicine cabinets are sealed can go a long way to improve the conditions. Drywall can be attached with resilient channels.

Dampening the source should also be considered. Many associations are beginning to establish minimum coverage of hard floors with carpeting, restrictions on hard soled shoes, and setting limits for sound levels from audio equipment. Other, more sophisticated strategies like baffling can be employed.

If problems arise, the first steps are to determine the existence of a real problem, attempt to quantify it, inspect to ensure that components were actually built as planned, and, then, hire a qualified consultant to recommend improvements. Most irritating noise issues can be resolved with some sound evaluation and thinking.