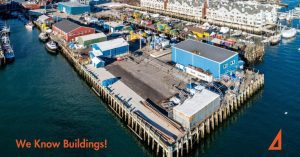 As part of that sale, Criterium Engineers performed enhanced commercial building inspections for a series of more than 50,000 square feet of warehouses, office buildings and parking areas.

Hunter Griffiths, Criterium’s junior project engineer, assisted with the project and noted, “Our project scope looked at the condition of ten buildings—which varied from offices to warehouses to bait storage. We also looked at the surrounding pavement.”

Union Wharf is Portland’s oldest commercial wharf, built in 1793 at a time when horse-drawn carts carried goods between buildings, tall clipper ships visited the docks, and sailors, stevedores, and fishermen passed each other in the street. The Dunham Group listing for this historic property described the combination of retail, office, warehouse, production, berthing, and parking spaces. They noted that wharf has been managed and meticulously maintained and offers a diverse mix of companies with a history of long-term tenants.

After 160 years of ownership, the Proprietors of Union Wharf, led by fifth-generation owners and managers Charlie and Malcolm Poole, sought “a like-minded entity to carry on the tradition of maintaining a working pier and a working waterfront.”

GMRI held extensive discussions with fishing community leaders, city leaders, the Department of Marine Resources, community organizations, and other interested parties, they submitted a proposal to purchase Union Wharf. The Poole family selected the GMRI bid because of their commitment to steward the wharf as the centerpiece of the city’s working waterfront and because they offered a fair price.

The Criterium Engineers headquarters is based near Portland. Our team congratulates our client, GMRI, on preserving this key working waterfront property.